Cycling around the city

Bikes bikes, city bikes, fat bikes, touring bikes, hybrids – and then in Finland we have this bike called Jopo!

The fourth bi-annual Bicycle Friendly Cities Index by Wired brings Helsinki on to the lista as one of the most bike-friendly cities in the world. Helsinki along with Tokyo are back after an absence.

The study thanks Helsinki for bringing the culture of urban cycling back after a few years of downfall.

”Helsinki launched its bike share in 2016 and it is already a success, with further improvements and expansion being planned. It wants to reach a modal cycling share of 15 percent by 2020, in line with many European cities. And it works hard to keep its infrastructure clear of snow in the winter,” they say in the feedback for Helsinki.

One of the major improvements for the citizens was the cycle path through the city center, Baana, which was built on a former rail line. 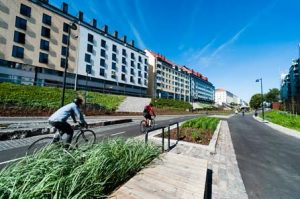 The next big thing was when the city launched the City bikes a couple of years ago.

City bikes are a shared-use bicycles for anyone to borrow for a fee. There is a daily, weekly or a season pass for sale. In summer of 2016, there were 500 bikes in 50 locations around the city and this summer, 2017, the number of bikes was increased to 1,400 and bike stations to 140 around the city.