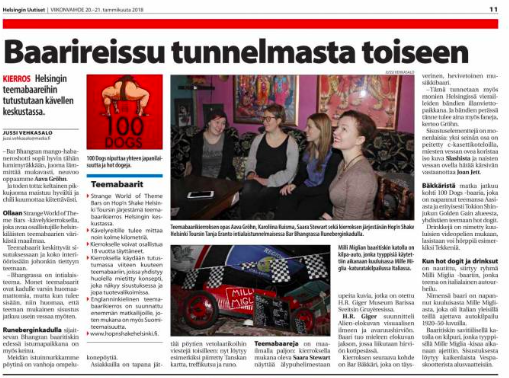 One Wednesday afternoon, just a few hours before starting on the bar hopping tour Strange World of Theme Bars, snow storm broke out. For some it was what they had been waiting for the whole dark and unusually rainy winter months, for some it pushed the thought of spring a little further.

The streets of Helsinki were suddenly packed with snow and it kept coming, but our group of brave and curious people were not afraid of the weather – and because it is easy in Helsinki to move around by local transport, they took the first tram to the right direction. 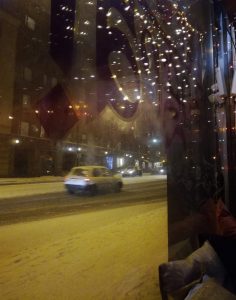 Bar hopping in Helsinki in the winter time

Hopping in to the first colourful and cosy theme bar felt so nice! Inside it was heavenly to sit down, loose the down jacket and other winter garments, sip drinks and let the snow storm blow outside. And when it was time to move on, it felt much easier to push their way through the snowy streets.

And so they went on, hearing stories about Helsinki bar scene and night life. Along with many cheerful moments the tour ended up in a local newspaper called Helsingin Uutiset. You can read it here online: